Venezuela will receive a commission of foreign ministers of UNASUR 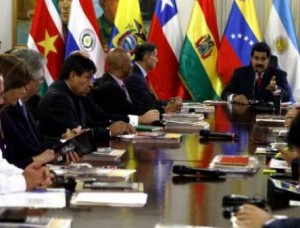 The committee of foreign ministers of the Union of South American Nations (UNASUR), which seeks to build bridges of dialogue in Venezuela, will visit Caracas next week.

It will be the second coming of a commission, after the meetings the end of last month with different sectors of Venezuelan society.

The Uruguayan Foreign Minister Luis Almagro, said yesterday that the Foreign Ministers of the Group managed to generate “mutual trust” between the Government of Venezuela and the opposition in seeking to end the violent protests that the country suffers from 12 last February.

On Monday, Venezuelan Foreign Minister Elias Jaua celebrated that Unasur has become a “catalyst for a willingness to dialogue” and noted that the Government of Nicolas Maduro is waiting “step of the opposition,” clumped in Democratic Unity Table (MUD), to sit and talk.