Venezuelan businessman paid the wedding of his son in Ecuador 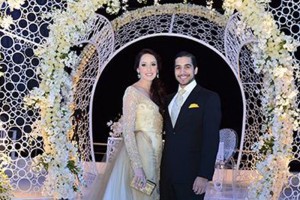 Over a year ago, on November 15, 2014, a lavish wedding in Ecuador drew attention: that of an Ecuadorian bride with Jose Ricardo Rincon, the Venezuelan son of a businessman with links to PDVSA, who is now detained in Houston on suspicion of belonging to a money laundering mafia through the state oil company.

Two days earlier, the couple had married in a civil ceremony celebrated in event hall of a residential complex. The website of the Venezuelan newspaper Sumarium, reports that 95 crystal lamps with turquoise and blue lights, in addition to 48 pillars decorated with white rose bud and orchids branches.

Silver wallpaper covered the walls of the event room and there were also 1,600 candles and furniture with silver upholstery. It is estimated that the wedding decor cost more than $ 5 million, a staggering contrast to the economic crisis facing the country of origin of the tycoon.

an overwhelming figure that contrasts with the economic crisis that affects the home country of the tycoon.

That day, the couple was married by the interior minister of Ecuador, but that was not all, the church wedding, of course, was more “bombastic.” It took place in the Montecristi Golf Club and featured international artists.

800 guests -150 from Venezuela- among relatives, authorities, businessmen, politicians and others attended the wedding. “True delicacies were served in the exquisite dinner, without dulling the giant wedding cake …” Reported the media.