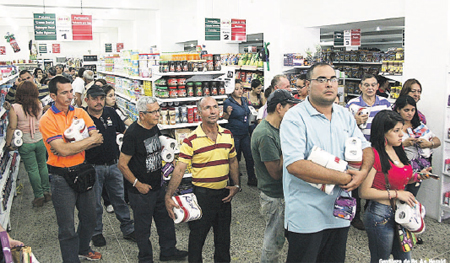 The government of Venezuela has launched over the weekend a 30-second spot on the state television which invokes Venezuelans to curb nervous “purchases,” accusing them of shortages of basic goods the oil country lives.

Since early this year, thousands of Venezuelans have cornered the supermarkets and supplies markets in long queues in search of scarce products such as toilet paper and milk.

“Please buy only what you need,” says one spot presenter of the state channel VTV. “For the good of all, relax, be confident in your country and turn down to nervious shopping,” the two celebrities added together.

For his part, President Nicolas Maduro said on Saturday that last week, in just four days 18 million people went to supermarkets, “three times more than in any circumstance.”

According to the government, the shortage stems from an “economic war” is waged by unscrupulous businessmen who hoard products to create anxiety.

While the opposition leader Henrique Capriles referring to the Maduro’s tour through several countries looking for financing for Venezuela, asked himself: “for what  traveling the World was worth?. Will they solve shortages?, queues?. Did they bring milk?”.