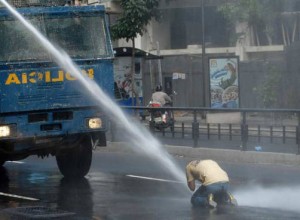 Gunshot wounds, two students arrested, and hundreds of people victimized by teargas were the result of the intense protest of students and teachers against the new University law. The police and the National Guard suppressed the manifestation.

Around 3 pm the law was approved, with astonishment and indignation people from Venezuela rallied on Thursday morning to protest against the approved project  by the National Assembly which was made without any consult or debate.

The National Assembly will cease its functions on January 4, and during the last two weeks it has approved nine laws through expressway. Laws that the new parliament would have trouble accepting.

The law states that Chavez through the Universities Ministry would govern all the  higher education programs. This new law eliminates any student council, among others, and defines the University as “a construction process to overcome cultural hegemony of a capitalist society.”

The definition of the word “College Teacher” is replaced by the term “Academic Worker” and the university institutions should “promote and consolidate new social relations of production in the framework of the Bolivarian Socialist Fatherland.”

Meanwhile Cecilia Garcia, Principal from Universidad Central de Venezuela, the biggest of the country, stated that the law was not consulted, and assured that constitution its above any norm which consolidates the university autonomy.