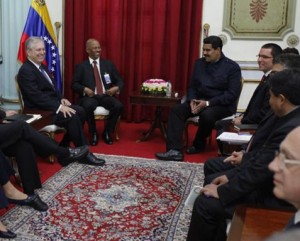 Venezuela’s President Nicolas Maduro met this Monday afternoon with the mission of foreign ministers of the Union of South American Nations (Unasur), who are in Caracas.

After several hours of meeting between the Executive and the foreign ministers of UNASUR, President Maduro announced that tomorrow Tuesday, agreed to have a meeting with the opposition and the organism.

“The foreign ministers proposed a tomorrow meeting with the delegation of the opposition. I agreed as I have been calling for political dialogue, democracy peace and Venezuela, “the president said after leaving the meeting.

He noted that maintained “quite extensive” conversations in which told “the fight that we are giving for peace in Venezuela, the need to condemn violence as a political means, because violence can not be the way to settle differences of politics.

This is the second visit of UNASUR to participate in the National Peace Conference promoted by Maduro, which fosters dialogue with all sectors of the country.