Venezuelan students are evicted from campgrounds in Caracas 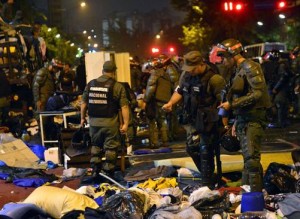 Almost a thousand members of the Bolivarian Police of Venezuela and the National Guard troops acted during early Thursday in a raid to dislodge the main redoubts of students movements in Caracas.

During the operation, the security forces shot down four tented camps in east of the city, where militants from the most radical opposition student factions were camping out for several weeks.

According to official reports, 243 people were arrested. However, versions of student´s spokesmen and complaints in social networks took that number to more than 600, including many minors.

The Minister of the Interior and Justice, General Miguel Rodriguez, congratulated himself by a `clean operation´ that would have counted on the `surprise factor´ as its main ally.