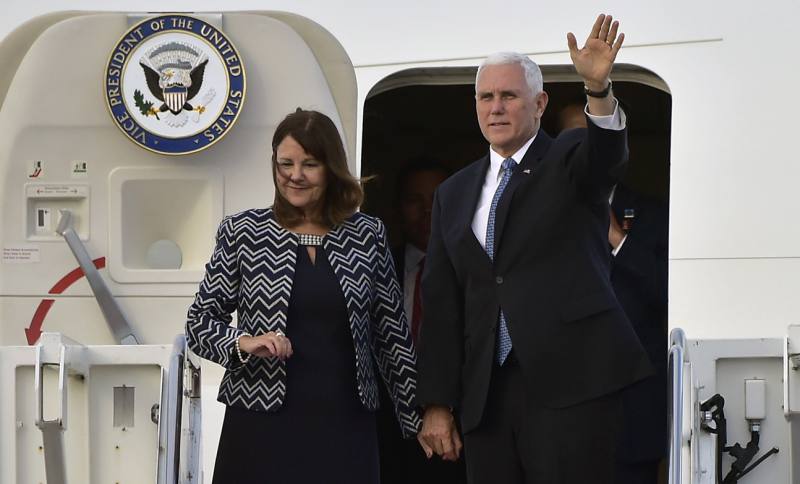 At 5:26 pm yesterday, Pence disembarked at the Mariscal Sucre airport in Quito, from a plane of the US White House, with his wife, Karen Pence, from Manaus (Brazil), on a tour of Latin America, about the new migratory conditions.

The red carpet was extended at the airport to receive it in the midst of ceremonies in the presence of the foreign minister, José Valencia, and the ambassadors of Ecuador in the United States, Francisco Carrión; and the United States in Quito, Todd Chapman.

Previously, Valencia gave a press statement, which cataloged the arrival of the second president as a “fruitful” meeting.

He said that today’s meeting between the head of state, Lenin Moreno, and Pence will address the bilateral agenda, and possibly the issue of Venezuela. “I cannot anticipate to what extent that conversation will be; what is certain is that Ecuador’s approach to Venezuela is well known, “said the diplomat.

In addition, the commercial agenda is a “priority” for Ecuador, since there is an interest to boost exports and seek access to new products to the northern country. The dialogue “will be oriented to the search of a mechanism that gives effectiveness to the commercial exchange”, added Valencia.

Pence is the 48th Vice President of the United States, and in his first twelve months in office he has traveled throughout Asia, Europe and Latin America. In January he visited the Middle East.

The House of Government was decorated with floral arrangements extended by their courtyards, and as usual in these acts, a red carpet was deployed from the parapet.

The visit is scheduled at 09:30, and the Yellow room will be the stage for a formal greeting. Meanwhile, in the banquet hall will be given the official statements of the two personalities.

The United States is the main destination for exports: in 2016, $ 16.8 billion was exported. Therefore, there is interest in deepening the commercial relationship and in defense.

In the last decade, Pence is the second highest authority to arrive in the country. Hillary Clinton, former Secretary of State in the government of Barack Obama, met in 2010 with former President Rafael Correa. (I)

“Recycle” is a new technique to exploit recycled

Assistance to Ecuador for $ 7 million comes from the United States