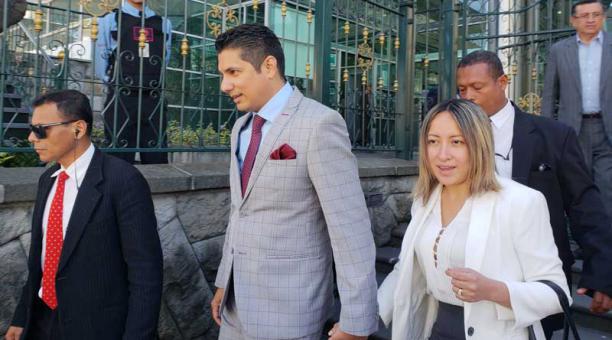 The version of Rommy Vallejo, former Security Adviser to the Presidency, is key to linking former President Rafael Correa in the investigation into the kidnapping of ex-ambassador Fernando Balda.

This was indicated on Tuesday, June 12 of 2018, in a press conference, Attorney General Paúl Pérez. “In recent weeks several elements of conviction have been found that are considered sufficient to link the former president in this process.” Vallejo gave her testimony in the Prosecutor’s Office on June 5 and stated that her job in the Presidency was to verify risks and threats to the Government

She recalled that in 2012, when the plagiarism was perpetrated, there was a judicial process against Balda and, as a result, an arrest warrant. She indicated that she was asked to travel to Colombia to find out if the politician was in that country irregularly. Who asked him to find out if Mr. Balda was in Colombia? Prosecutor Perez asked. “The President of the Republic (at that time Rafael Correa),” said Vallejo.

According to the former counselor, the request was made verbally and she did not remember the exact date. On her trip to Colombia, she held meetings with senior officials of the Police Intelligence Directorate (Dipol) of that nation. Her intention was to locate Balda and assumes that on his return to Quito he gave the President a report on the coordination that took place. He did not give more details.

The Prosecutor asked what information was received from the Dipol and Vallejo said: “At that time none, then when Mr. Balda was deported I received a call, I do not remember from whom, indicating that he had been arrested and that they were processing the issue of deportation. ”

The version of Correa does not match Vallejo’s. The Prosecutor’s Office took his statement on May 24, from the Consulate of Ecuador in Belgium. There he indicated that he learned that the ex-legislator was in Colombia because he himself was responsible for making it public through their social networks. “He spread photos, for example with a long rifle, others in which she was with (Álvaro) Uribe,” said. And added that she knew about these messages indirectly, since Balda had her blocked in his social networks.

But when the Prosecutor asked him if any of his officials informed him about the location of Balda, Correa only repeated: “This was known because Balda sent photos to social networks.” The former president also was asked if he knew the policemen who are being detained in this case. He denied it and said: “I have not even heard their names, until after the version, by the media.”

The same question was asked to Vallejo. The former official said she knew only two of them. She even mentioned that when she was the National Secretary of Intelligence, two years after the kidnapping, she received the services of one of the agents in which he asked for help. “He was always told through the Legal Coordination of the Intelligence Secretariat that he could not be helped,” she said.

The aid referred to was about the “legal status” of the agent, after the kidnapping was reported. Balda’s theory is that Correa ordered his plagiarism and that the operation was financed with public funds.

On the afternoon of June 12, Prosecutor Pérez referred to the case. He said that “the existence of orders that were generated through a chain of command” has been established. He assured that in his administration there will not be any political persecution, but neither will any crime be left in impunity. Diego Chimbo, lawyer of two of the three policemen prosecuted, indicated earlier, in the exterior of the Prosecutor’s Office, that there are enough elements to reveal where the kidnapping order came from.

So far no date has been set for his clients to give advance testimony, but the lawyer maintains that Vallejo’s version will give meaning to what the two agents will reveal at the time. “There was an inordinate desire to bring Balda (to Ecuador) and see him in prison, so they first tried a deportation and then used other mechanisms,” said the lawyer.

The Office of the Prosecutor still collects versions of former officials and policemen. Until July 18, new evidence of charge and discharge may be included.

The abduction of ex-ambassador Fernando Balda was perpetrated on August 13, 2012, in Bogotá, Colombia. He lived in that country, because in Ecuador he had a two-year prison sentence for slander against former president Rafael Correa. (I)

Assembly responds that Correa can be prosecuted as any citizen