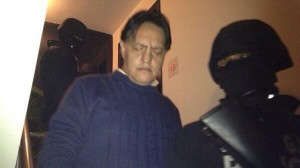 Veronica Saráuz feels persecuted and carried her discomfort to the Interior Minister, José Serrano. She is the wife of Fernando Villavicencio, Former Adviser of Cléver Jiménez. The two were sentenced to 18 months in prison for libel, but with the implementation of the new Organic Integral Penal Code that time was reduced to one year.

Saráuz told the Minister that for eight months she has been watched over by unknown people, who she asks to be identified. She carried photos and evidence,which according to her, the Minister promised her to investigate.

The woman recognized the opening of the official and said “he asked me to demand my husband to surrender. I will never do that.”