Venezuelan families surveyed inhabit the Rapid Gender Analysis, focused on the situation of the Venezuelan population in Ecuador. 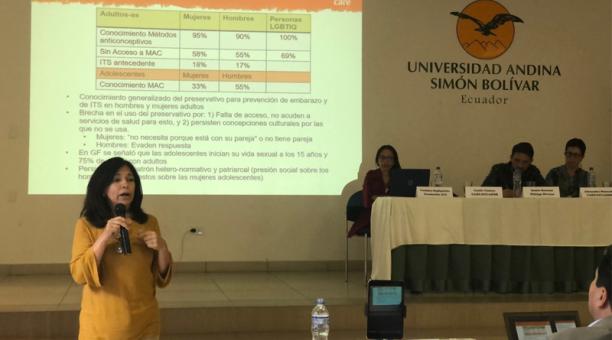 The study, which was presented on Monday, December 16, 2019, was prepared by the organizations Care Ecuador, Alas de Colibrí and Diálogo Diverso. In addition to the lease that Venezuelans pay, “to bathe you have to pay, to urinate you have to pay, to dump the garbage you have to pay,” details one of the stories collected during the investigation, which was conducted through 782 surveys, 12 focus groups and 27 in-depth interviews.

Among the citizens studied, it was observed that 38% had less than one month of having arrived in Ecuador, while 62% had one to six months. 52% of men and 42% of women said that most of the time, since they left Venezuela, they had to live on the street. In the cases of those who have had access to shelters, according to the data collected, they have found an adequate service, with access to water, rest and food.

But the residence time is a maximum of five days, on average and the services do not extend to all cities, said Alexandra Moncada of Care. 100% of Venezuelan people who have a fixed place to live in Ecuador, rent it, according to research.

88% of women and the same percentage of men said that these spaces are inadequate, overcrowded, of low quality and with a high level of exploitation towards people. “Everyone fights with everyone, there is no privacy,” says another story.

13% of men and the same percentage of women and 100% of Lgbtiq + people reported insecurity in accessing water. Moncada points out that people say they are afraid of water quality because they live in precarious areas of the city, where access to vital fluid is scarce. They also say they prefer to buy it, since they have no tools to boil it.

Venezuelans also report insecurity. For example, they expressed their fear of using the toilets of the places where they live, where despite being places that group several families that do not know each other, there is an absence of separate toilets for men and women.

There is also no place for women and men to change clothes. The study was conducted in five provinces: Manabí, Sucumbíos, Pichincha, Azuay and El Oro. In Manabí, Care’s representative said that it was identified that several of the buildings that were banned for housing after the 2016 earthquake are leased to Venezuelans. That risk – Moncada says – is an incentive for the creation of decent housing programs.

It also calls for political decisions regarding shelters to work to provide effective care. Regarding sexual and reproductive rights, the study found that among the problems affecting the Venezuelan population in Ecuador, there is a lack of access to contraception, unplanned and risky pregnancies, teenage pregnancies, limited access to prenatal care or childbirth, among others.

In the case of adolescents, 33% of women and 55% of men have knowledge about contraceptive methods. 5% of Venezuelan women surveyed were pregnant, five months on average, according to the study. These are pregnancies without care.

Verónica Supliguicha, Technician of the Alas de Colibrí Foundation, said that shows that pregnancies occur during the migration process of women. The study showed that 58% of women of reproductive age do not have access to gynecological care for one year and female adolescents do not have information about menstruation.

The study also showed that Venezuelan citizens suffer gender-based violence. Until August 2018, 59% of Venezuelans who entered Ecuador were men, while in 2019 55% of women were registered.

With the visa requirement – Verónica Supliguicha, a technician from the Alas de Colibrí Foundation – Venezuelan citizens did not stop entering Ecuador as official figures show, but arrive by irregular steps.

During the focus groups conducted for the Analysis, the majority of adult women who have entered on irregular roads said they had suffered sexual assault and different types of gender-based violence.

Supliguicha points out that survivors of violence do not report for fear of reprisals or deportation. In addition, transactional and survival sex are common forms of coping with Venezuelan women.

The investigation allowed recovering 16 stories of Venezuelan victims of trafficking. 12 of them are of legal age and four are teenagers. Of the 16 cases, only 50% have been prosecuted.

13 victims are women, two are men and one is transfemenin. “Some men kidnapped us, they covered our eyes, they took us in a truck … they had us naked, tied up and raped us whenever they wanted,” says one of the testimonies of victims of human trafficking.

The remains of Douglas Rodriguez, victim of the shooting in New Jersey, arrived in Ecuador