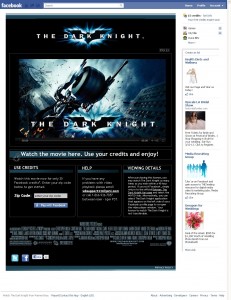 Millions of people around the world visit Facebook every day to check out the latest news of family and friends, as well as the applications and games that the social network offers. Now, Facebook users can watch Warner movies for a minimal fee on Zuckerberg’s web site.

“Facebook has become a daily destination for hundreds of millions of people. Exposing our films to the public through this social network is a natural extension of our distribution efforts,” said Thomas Gewecke, president of Warner Bros. Digital Distribution.

With this initiative, Warner hopes to stimulate watching movies legally over the Internet. Users can rent or buy films through Facebook Credits, virtual money that the social network created in January.

Christopher Nolan’s “The Dark Knight” was the first film available on Facebook; United States users could watch it for 48 hours after purchase on Tuesday. According to a Warner statement, more titles will be available for purchase or rental on Facebook in the coming months.

Starting Tomorrow No One Can Order Advertising