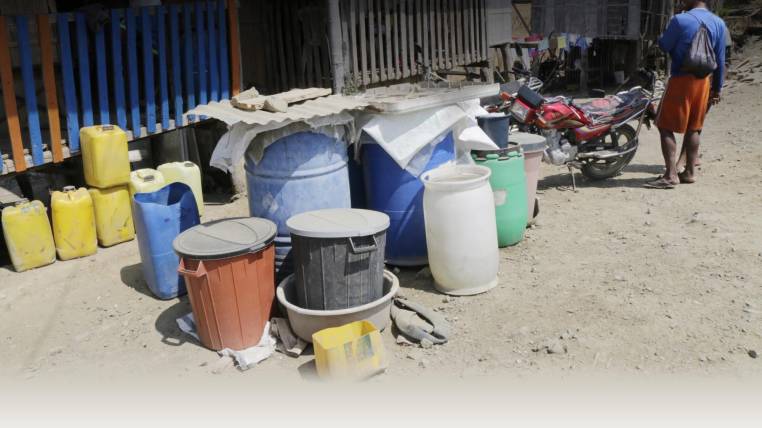 Access to the liquid is non-negotiable and obligatory, but not all of Guayas enjoys this privilege. In the rural area of the province, only 50% have coverage and in urban, 90%

The force of water in Bucay caused the population to run out of vital liquid and the health emergency to be activated. It happened last February. The overflow of the El Limón and Blanco rivers caused damage to the main source of water collection, and the more than 6,000 inhabitants of that Guayasan canton had to be supplied by tankers from nearby towns.

Something similar happens in Guayaquil when turbidity levels rise in the Daule River, from where the liquid is captured and processed for distribution to the 2.6 million inhabitants of the city. The service is suspended if the turbidity levels exceed the figure of 1,500 in the meters (the maximum allowed range to process the water), or when there is some type of pollutant, as happened in June 2016, when a company spilled bunker to the tributary and the city was left without water in a general and untimely manner.

The next March 22 is the Day of Water. The world looks up and supervises how it is fought in different countries to guarantee the right to access vital fluid without limitations. At this juncture, EXPRESO analyzes, with experts and authorities, the supply situation taking into account some cantons of the province of Guayas, whose population exceeded 3.6 million inhabitants in 2010 and where water coverage reaches the territory 84%, according to a publication made in 2014 by the National Information System. That is, no canton has one hundred percent service coverage.

The vulnerability of affluents or water collection systems at the local level exposes a problem that, beyond the emerging situation due to nature, shows a certain negligence on the part of the authorities, says activist Billy Navarrete, secretary executive of the Permanent Committee for the Defense of Human Rights, Guayaquil headquarters.

Navarrete considers that, since water is a universal human right, the State should seek its general access. “And this is not being fulfilled. A big example is Guayaquil. ”

José Luis Santos, general manager of the Municipal Sewerage and Potable Water Company of Guayaquil (Emapag), refutes this position and argues that, at the end of 2012, one hundred percent of drinking water coverage was reached up to the consolidated limit of the city, legally recognized by the Municipality. However, he accepts that due to the population growth and extension, the percentage of coverage was 98% for this year.

“To the extent that municipal legalization is taking place and in response to population growth, potable water services are being incorporated, expanding the coverage towards the new recognized limits,” says Santos.

Navarrete does not agree with that figure. “An important sector, such as Mount Sinai, which exceeds the quarter of a million inhabitants, is not having that service.” It maintains that beyond the existence of an irregular human settlement situation, “this condition should not affect access to this right”.

Coincides with him Luis Gómez González, president of the Confederation of Districts of Ecuador (Conbade). “There are several sectors that do not get water by pipeline, they have it for tankers and that makes the service more expensive”. Name places like Popular Bastion, Lomas de la Florida, Pascuales, Mapasingue, Balerio Estacio, among others, where the service does not reach at least 60% of the population, “about 120 thousand families,” he points out.

The problem is not exclusive to Guayaquil. In Milagro, the general manager of the Municipal Public Company of Drinking Water, Storm Sewer, Sanitation and Sanitation, Jean Lucero Novillo, ensures that the current coverage is 83%.

The process for obtaining the liquid in that canton is done by means of extraction. “It is chlorinated before being sent to the distribution network system. Studies of the Drinking Water Master Plan indicate that the groundwater that Milagro has is of optimum quality, “he says.

In that corner, from the deposits of Chobo, the liquid that goes to Durán comes out. Ironically Durán, surrounded by rivers, does not have safe water 24 hours: the service is deficient, arrives rationed, by schedules or does not exist. “Water is a human need and they are not giving it,” says Duran activist and politician Lorena Rivera.

There the situation becomes annoying because they consider that the works announced by the current municipal administration have not been fulfilled. “We do not have water. It comes from the Chobo field and it is not treated water, it is raw water that we are receiving, in some sectors by home networks and in others by tankers, which sell us “, says Rivera.

Of the residential networks, residents cite rationing and schedules as the biggest inconvenience, since the service does not arrive at the time indicated. “It arrives at dawn and with low pressure,” he adds.

The panorama of the water distributed in tankers is not exclusive to Durán. Join the rural sectors of Daule, Pedro Carbo, Naranjal.

Rodolfo Guanazo Magallanes, inhabitant of the cemetery sector, in Pedro Carbo, says that the failures in the water supply are constant. “It comes with concho and yellowish sometimes. Despite this, we are charged monthly for the service, whether or not there is water. ”

The situation there, he stresses, has been informed to the company of drinking water, “but nobody gives us a solution”. While in Naranjal, in the Lechugal area for example, its inhabitants made the decision to install wells to obtain groundwater, something that Navarrete does not recommend as a highly contaminated liquid, due to the agricultural chemicals and the leachates of the waste that ends in the ground.

This year’s commemoration focuses on exploring how nature can help us overcome the challenges of water in the 21st century. The Inamhi prepares several papers. KSG- ERS

Projects to provide the service, underway

The safe water coverage in Ecuador maintains a “huge” gap between urban and rural areas, acknowledged the general manager of the Development Bank of Ecuador (BDE), Byron Ruiz, in an interview with EXPRESO last January. “There are (rural) areas where 50% coverage is reached in water. In the urban area it reaches 90%. ”

Hence, since 2015 this entity has approved 33 environmental sanitation projects (sanitary sewer and potable water) for $ 53.4 million.

It also plans to deliver two billion dollars over four years for projects of this type.

Within the framework of the first stage of the Water and Sanitation for All Mission, the national Government, BDE, Secretariat of Water, Secretariat of Planning and Development and the mayors of 55 prioritized cantons signed a Letter of Commitment of Financing for a total amount of $ 275 million, to benefit more than 1.6 million inhabitants nationwide.

The urban planner Felipe Espinoza considers that the programs that are executed must be under the “umbrella” of a macroproject, if possible involving a commonwealth.

“It requires a comprehensive approach to how it is distributed and how it is powered. There is no planning for several municipalities, “he says.

This architect is sure that with the macro plans that are established to execute the projects it will be possible to optimize the resources. “You have to do an inter-cantonal approach,” he suggests. (I)