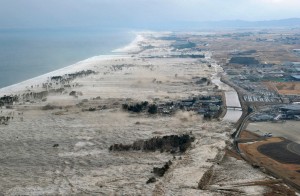 Around 12:30 in Ecuador (17:30 GMT), the northeast coast of Mexico was stalked by two-foot waves caused by the tsunami occurred yesterday afternoon in Japan. The waves could grow to two meters as reported by the Center for Scientific Research of the region. The Mexican government has decreed the alert on its Pacific coast, but emphasized that the phenomenon represents a moderate risk.

In California, United States, evacuations were reported in five coastal counties, while in Hawaii, the tsunami came ashore with waves between 50 and 70 centimeters, according to early reports.

Central American countries enacted a possible tsunami alerts and began monitoring the Pacific coast before the tsunami risk. Tsunami is expected near the Central American coast of Ecuador 17:00 (22:00 GMT) at low tide, which would reduce the risk of danger.

Colombia so far does not mandate the evacuation order, but it is monitoring the waves in the Pacific. Lima, would have to close the oceanic route through the city by the sea. In contrast, in Easter Island, Chilean island of 3,500 km coastline, a preventive evacuation of its 4,000 inhabitants is planned.

State of Emergency Was Lifted in Ecuador