Tuesday , May 19, 2020, among other measures labor, energy and economic, Lenin Moreno , president of Ecuador, ordered the reduction of the day labor of public servants of the Executive Branch from eight to six hours , “giving priority to telework .” 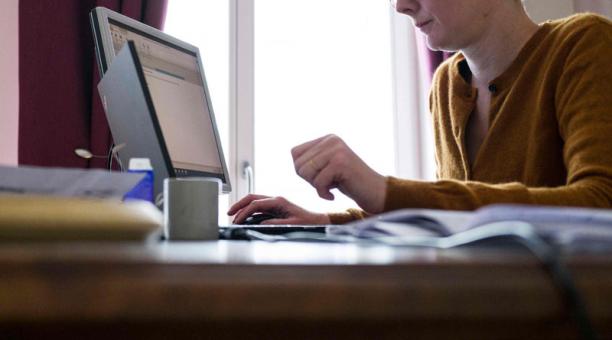 Because of the pandemic of the covid-19, teleworking became a labor modality to distance from home , both in the private sector as part of the public , due to the suspension of face time provided in Decree 1017, the Last March 16, when the state of emergency for the coronavirus began.

But what is teleworking, how much time should a person actually spend on it ? The Humanitarian Support Law, approved on Friday night May 15 in the National Assembly , refers to the need for ” disconnection ” of workers. However, it has generated concern in sectors of workers for the time estimated for this right.

With the First Reforming Provision of the so-called Humanitarian Law the following text is included in the Labor Code :

“Teleworking is a form of work organization, which consists of carrying out remunerated activities or providing services using information and communication technologies to support contact between the worker and the company, without requiring the physical presence of the worker in a specific workplace … Workers who provide telework services will enjoy all the individual and collective rights, as well as the social benefits contained in this Code ”.

2. Where will teleworking take place?

The Law approved by the Assembly states that “the parties (employer and employee) must determine the place where the worker will provide the services, which may be the worker’s domicile or another determined place. However, if the services, by their nature, are capable of being provided in different places, they may agree that the worker freely chooses where she will exercise her functions. Teleworking will not be considered if the worker provides services in places designated and enabled by the employer, even when they are located outside the company’s premises ”.

3. The right to disconnect.

“The employer must respect the right of the teleworker to disconnect, guaranteeing the time in which he will not be obliged to respond to his communications, orders or other requirements,” reads the text approved by the Assembly.

4. How long should the disconnection last?

In the so-called Humanitarian Law it is mentioned that “the disconnection time must be at least twelve continuous hours in a twenty-four hour period. Likewise, in no case may the employer establish communications or formulate orders or other requirements on rest days, permits or annual workers’ holidays. ”

5. Salary and equipment in teleworking.

In the Law it is mentioned that “the salary of the teleworker will be agreed between the employer and the worker according to the general rules of this (Labor) Code. The employer must provide the equipment, work elements and supplies necessary for the development of telework. Every employer that hires teleworkers must report this link to the labor authority. ”

Telecommuting and obligations at home

Peter Sanipatín, president of the Pichincha College of Clinical Psychologists , is concerned about the context of confinement by covid-19 with the new dynamics of teleworking. That scenario may contribute to an increase of anxiety in people, he says. And this, in turn, could trigger various reactions, such as increased levels of stress .

The Law on Humanitarian Support other labor reforms are contemplated, such as setting the day of work , which may be reduced by 50%, in which case there will be a pay cut of 45% in employees. The norm allows the application of agreements between employers and workers, to adjust working hours, wages, vacations.

The Law was elaborated by Lenín Moreno and sent to the Assembly. The original project also contemplated the imposition of contributions for nine months for workers. The President of the Republic asked the assembly members to withdraw the tax chapter .

The Law was approved without contributions. Unions have made observations and await a presidential veto of the legal project, before it is sent to the Official Registry for its entry into force.