WikiLeaks has released a secret draft text for the Trade in Services Agreement (TISA) Financial Services Annex, affecting 50 countries and 68.2% of world trade in services.

In an attempt to prevent transparency, “the project has been classified to keep  it secret not only during the negotiations, but for 5 years after the entry into force of TISA,” explains the leak portal on its web page.

The draft Financial Services Annex reveals the rules that could contribute to the expansion of financial multinational companies -with offices located mainly in New York, London, Paris and Frankfurt- to other nations by preventing regulatory barriers.

Joaquin Arriola, analyst consulted by international media, explains that the proposal “does not promote regulation of the international financial system, but on the contrary,” he argues. The aim of these negotiations, for Arriola, is that: “Governments may have access to reducing their ability to control the actions of private financial institutions in their own markets,” he stresses. 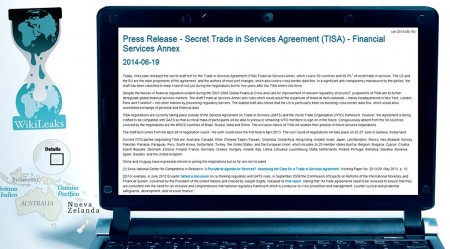 Water Law was approved in the Constituent Assembly of Ecuador