Women dies during shooting in front of the White House 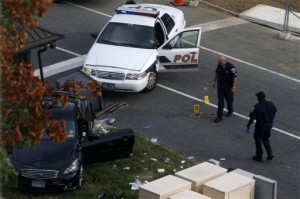 Women dies in shootout in front of the Capitol

Today the Capitol, seat of the U.S. Congress in Washington, reopened its doors after being closed when several shots were heard near the building. According to the police report there is a dead woman.

The incident occurred in the avenue in front of the White House, which involved a woman who was in a vehicle. According to a report by local media, the woman tried to pass a safety barrier of the White House, and immediately she was chased by the Secret Service, an event that ended near the Capitol, where the shooting occurred.

The CNN quoted intelligence sources who said that in the suspect vehicle was a minor.

The fact is when, for four days, the U.S. government suffers a serious crisis for the confrontation between Republicans and Democrats. The latter party led by President Barak Obamna, who advocates a popular health program that Republicans do not want to back and in retaliation do not approve actions that generated the shutdown of about one million U.S. federal employees.