Workers against the new ceiling fixed for retirement pensions 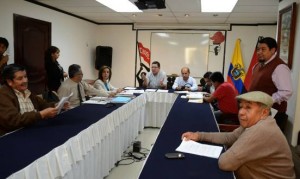 Workers unions announced yesterday they will submit a constitutional claim against Agreement 204 of the Ministry of Labour that determines a new ceiling to monthly retirement pensions according to the unified basic monthly salary (this year $ 354).

This was announced yesterday by Pablo Serrano, president of the CEOSL (Ecuadorian Confederation of Free Trade Unions), during a break in the meeting between leaders of organizations belonging to the United Workers Front (FUT): CTE, Cedocut and UGTE, who rejected the government’s decision.

“A ministerial agreement can not change the law (…) they are changing the law, that’s unconstitutional, workers’ rights are inalienable,” Serrano said. For Mesias Tatamuez, of the Cedocut, only the Constitutional Court can interpret law, not the Minister of Labour.

José Villavicencio, president of the UGTE, said that this limitation imposed on retirees goes along with the withdrawal of the state contribution of 40%, which was approved in the Labor Law.

Felipe Mantilla, former Minister of Labour, indicated that a unified basic wage, “corresponds general workers,”however, a unified basic remuneration (which is established in the Labour Code) is what individual workers earn, depending on their branch of activity.

For Ivan Nolivos, labor lawyer, the components to fix the pension have not changed and are contained in Section 216 of the Labour Code, but a ceiling was set.

Nolivos considers that the regulation of a law is a faculty that corresponds only to the President, and that the interpretation of a regulation is a power of the legislative branch or the Constitutional Court.

5 years after the 30-S, some people consider it as a day of national mourning