Workers, For and against government, expressed their needs in underway 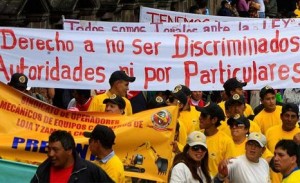 The two marches of workers were not found in Quito. While they walk in the same way by several avenues, organizers modified the hours to avoid confrontation. Also members of the police took a clean sweep the streets for safety, avoid confrontations and divert traffic.

Trade unions who support the Government began the inderway at 11:00 from the Arbolito Park. Their journey point topped four blocks of hundreds of workers who walked silently, but with banners with the names of their organizations and their demands focused on the labour code.

In the plaza San Francisco, the leaders, Marcelo Solórzano and Romelio Gualán, climbed to the stage to ask the regime and businessmen a joint construction of the labour code, also complained to the President answers to official initiatives on agrarian reform and the water law.

Carlos Marx Carrasco, Minister for Labour Affairs, recorded a greeting for Ecuadorian workers and asked that this may 1 “Let’s make it the day of Homeland”.

Meanwhile, workers who don’t support the regime of Rafael Correa, departed from the Provincial Council and came to the Santo Domingo plaza. The Ecuarunari attended the March to reject the exploitation of the Yasuni National Park. Also marched the family members of the Sarayaku persecuted and shouted “No more persecution”.

Marchs in Guayaquil over Labor Day