Spokesmen of the environmental group YASunidos, which aims to prevent that the oil located in the Yasuni National Park is extracted, announced it will use legal resources and demonstrations to defend the signatures submitted to the National Electoral Council (CNE for its Spanish acronym).

Last Wednesday the members of the group attended the CNE along with its legal department to submit a review report on the process of signature verification, allegedly “fraudulent.” However, electoral authorities restricted the access of people to the building and guarded its entrance with soldiers.

The lead attorney for the environmental group, Julio Cesar Trujillo, said that the legal resource he will apply consists in presenting complaints and appeals to the Electoral Dispute Tribunal (TCE for its Spanish acronym). If the instance fails, they will go to international ones.

This Thursday the YASunidos group organizes a protest in Guayaquil along with the group Resiste Yasuní, which will feature a group of Amazonian families affected by oil exploitation. 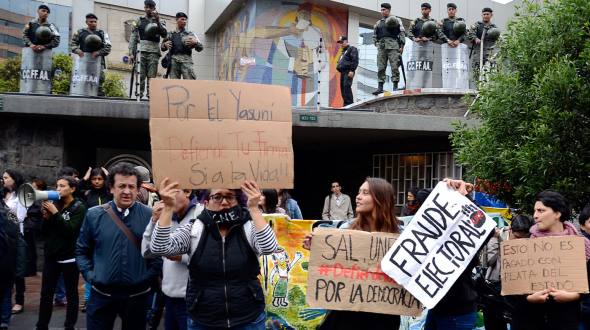 Members of the YASunidos group protest outside the CNE, while uniformed police members guard the entrance.

Venezuelan students are evicted from campgrounds in Caracas