Yuya, Mexican videoblogger was in Quito 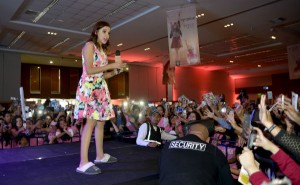 Mexican youtuber Yuya presented her perfume called True, in an event attended by her followers Wednesday in Quito.

With her cell she filmed everything _ and asked the girls present to pose for a selfie. She was accompanied by her brother, known as Fichis, who recorded everything to use the material in future videos.

She highlighted the message of the perfume: “Let the girls dare to be themselves, to fight for what they want.” On the name of the fragrance (True), she said she elected it because she wanted to “give the message that there is nothing more beautiful than the real, the true.”

She took time to sign autographs to the girls who were closer, she received several gifts and posed for a photo with a flag of Ecuador, with their ‘guapuritas’ on the background.

Cirque du Soleil will expand its activities in Ecuador