Zac and Vanessa Call it Quits 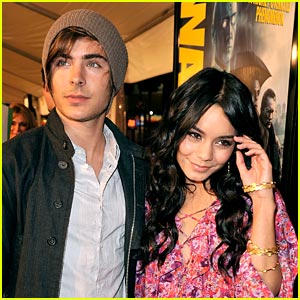 They met on the set of Disney’s High School Musical when they were still teenagers, two years later they became a couple and have been together for more than three years and even wedding rumors filled celebrity websites and gossip blogs.

Zac Efron, 23, and Vanessa Hudgens, who turns 22 on Tuesday, have just ended their relationship. Sources say there was no third party involved; apparently it was a mutual decision and they just grew apart.

Another source, close to the couple told usmagazine.com: ‘They are still talking and still friends. There’s no drama. No one cheated. They just grew up.’

Early in 2010 Zac and Vanessa had a tattoo done, in body parts only available for each other’s sight, as a symbol of their deep long lasting love; they had the word “ZAVA”(from Zac and Vanessa) tattooed permanently on their skin. Would they decide to remove those “love seals” now that they are not together anymore? Only time will tell.

At the moment, both young stars are working in different movies; Zac is in New Orleans filming location scenes for the movie The Lucky One and Vanessa is in Hawaii, filming Journey 2: The Mysterious Island.