2019 will define the future of eight political parties 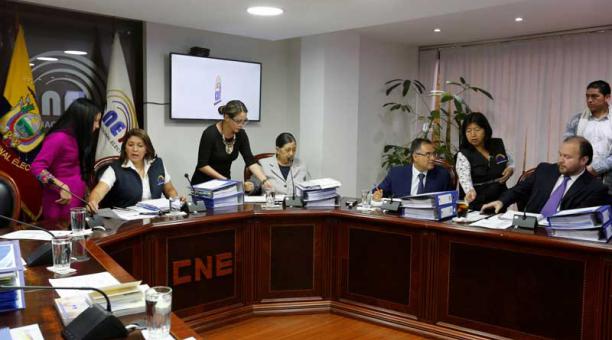 Eight national parties and movements and 16 provincial groups will arrive with a ‘yellow card’ to the sectional elections of 2019. That electoral contest will define whether they continue with juridical life or if they will be eliminated from the National Registry of Political Organizations of the National Electoral Council (CNE). Therefore, these organizations are already preparing their strategies to avoid disappearing. The strengthening of bases, the search for recognized cadres to represent them, alliances and political agreements are among their plans. The national groups that are on alert are those that did not comply with numeral 3 of article 327 of the Organic Electoral Law and Political Organizations, Code of Democracy. This is: not to obtain 4% of the valid votes in two consecutive national multi-personal elections; or, at least, have three representatives in the National Assembly.

Now the challenge in 2019, to stay current, will be to reach at least 8% of mayors; or a councilor in 10% of the cantons of the country, as established by the same Code. Last week, the CNE approved the electoral timetable and budget. Thus, local voting will take place on Sunday, March 24.

At the polls, 23 prefects will be elected, 23 vice-prefects, 221 mayors, 867 city councilors, 438 rural councilors, 4 089 members of the rural parish councils. Unidad Popular (UP) and Adelante Ecuatoriano Adelante (AEA) are two of the organizations that are already prepared in the political sphere. The two groups already lived a day of transformation. In 2014, UP was born after the extinction of the Popular Democratic Movement (MPD) and AEA, of the disappeared Institutional National Action Renewal Party (Prian).

In July of that same year, the electoral authority approved the cancellation of four permanent registration organizations. In addition to the Prian and the MPD, the Ruptura Movement and the Ecuadorian Roldosista Party (PRE) were eliminated. The latter was registered again, but now as Force Ecuador (FE). Neither UP nor AEA won seats for the Assembly or the Andean Parliament in 2017. Wilson Sanchez, national director of AEA, said that in the last election it hurt them not to have a presidential candidate.

Now, he said, they already have 30 names for various dignities. “I am convinced that we will not disappear, there is apathy against several traditional parties like the ruling party. We have traveled the country and we continue adding new tables that have good numbers, “he said. Mery Zamora, UP national deputy director, said that they have worked in the promotion of the party, its number 2 and identity. “There is now a very strong presence that has positioned us on issues such as corruption allegations. Two years ago we did not have enough positioning “, accepted the leader.

The party will define on April 7 and 8 the strategies it will develop to capture the greatest number of dignities. Prevent not losing Esmeraldas, which remains its stronghold. There the prefect Lucia Sosa would be the candidate for mayor of the provincial capital: Esmeraldas. Avanza also did not have a presidential candidate and his national list achieved only 2.15% of votes in 2017, which is insufficient to achieve a seat. Javier Ortiz, executive secretary of list 8, said they are restructuring the directives and that they still have 20 mayorships and a prefecture.

This leaves a high expectation mainly in Imbabura, where they were positioned in the previous sectionals, in 2014. In that year, Avanza became the second electoral force in the country. The City Hall of Guayaquil, however, will be one of the objectives of the Patriotic Society Party (PSP). In the last presidential elections his candidate was Patricio Zuquilanda and he achieved only 0.77% support.

Former President Lucio Gutiérrez, leader of the PSP, said it is undeniable that there has been a successful mayor who has worked for the Puerto Principal for 16 years. However, he pointed out that since Jaime Nebot will not go to re-election, the city is worried because it demands “a mayor of that size”. Centro Democrático (CD) sees with optimism its participation in the sectionals. Its maximum leader and prefect of Guayas, Jimmy Jairala, believes that now the conditions are different.

In the previous elections they won no seats and in the first round they backed the presidential candidacy of Paco Moncayo. “Today we have 22 provincial directives constituted and in Guayas there are cadres with important opportunities to win. We are a movement that we have not rested, we are in permanent work, I know we are going to spend this low “. The other organizations that carry out a strengthening work are the Social Commitment Force, the expressive and former minister of Social Inclusion, Iván Espinel; Ecuadorian Union, of the former candidate, also to Carondelet, Washington Pesántez; and Agreement of ex assemblyman César Montúfar. This Journal tried to contact them without success. (I)