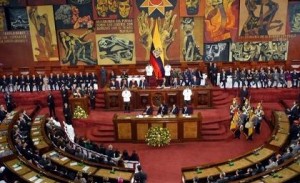 The National Assembly will present today a draft resolution of condemnation and rejection of violent acts produced in the country.

The bill has 16 paragraphs and resolves five points. Respondents note that there are more adjectives than arguments. It minimizes the demonstrations taking place for more than a month ago in several cities. But above all, it says that the “protests in the streets is a strategy of a soft coup.”

“It derides the opposition and the citizens. The government must listen to the people and the Assembly must demonstrate that the independence of powers of Montesquieu has not been erased by it,” says the head of the CREO block, Patricio Donoso.

Officialist lawmaker Oswaldo Larriva explained that the initiative aims to build the dialogue between the opposition and the government.

The resolution holds opposition groups responsible for the demonstrations and “identifies them as extreme right.” The document notes that the protests have turned into provocations against public force and violent acts against public and private property.

For Moises Tacle, Assemblyman of the Madera de Guerrero-Partido Social Cristiano Party, the bill is “an ignorance of social realities. To deny the legitimate right of the citizens to protest is another sign that the government and its spokesmen do not help to improve the social climate,” he said.

Officialist Vinicio Chica recognized the right of resistance, but “this does not imply violence. We respect the democratic expressions that denote fraternity among Ecuadorians.”

In the proposal these goups are described as “servers of dark political interests” that use “terror and fear” to misinform about the bills. Moreover, it accuses these political actors and the slogans they use in the social networks of trying to “destabilize and destroy the legitimately constituted regime.”

The resolution cites the American political scientist Gene Sharp, explaining that these actions are part of the strategy of street protests known as “a soft coup.”