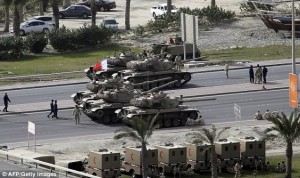 Since February the demonstrations of Bahrain have claimed several lives, today Khalil Marzouk, the head of the opposition known as al-Wefaq movement and member of the parliament informed that during the riots, two demonstrators perished and several others were wounded. During the clashes between the police and the demonstrators two civilians died along with three police officers, while gases and knives injured many others.

The Foreign Affairs Department changed its travel advice and warned visitors not to travel there, stating that the situation in Bahrain continues to be chaotic and unpredictable. Meanwhile the police managed to clear the anti-government demonstrators from Manama’s Pearl Square. This location has become the center of the protest movement, but after the intervention of the police, reports confirmed that it could turn into a slaughterhouse for those that peacefully demand against the government administration.

Yesterday King Hamad ibn Isa Al Khalifa declared a state of emergency for three months. This order was issued a day after armed forces from Saudi Arabia and the United Arab Emirates entered the land to detain the protesters. A medic in the village of Sitra, south of the Manama capital, informed that several villages are being attacked by armed forces that open fire without remorse.