Bonil defended yesterday his cartoon before the SuperCom 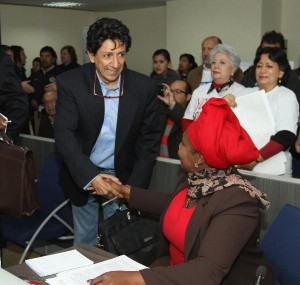 The Ecuadorian Xavier Bonilla, mostly recognized as Bonil, appeared yesterday before the audience of substantiation for the claim that 14 Afro organizations sued in October 5, 2014 against him.

These groups accuse him of having drawn a caricature, which they call to be “discriminatory” against the Alianza PAIS legislator, Agustin Delgado, the same that was published by the newspaper El Universo, in August 2014. The cartoon refers to Delgado and his mistakes on reading a report to the Plenary of the Assembly. Furthermore, another lawsuit was sued against the Guayaquil newspaper for publishing this cartoon.

Ramiro Garcia, one of the lawyers of Bonil, said that the technical reports that support the demand were never submitted or allowed to read

The lawyer said that officials of the Council for the Regulation and Development of Information and Communication (Cordicom), who prepared the document “should be in the audience and explain who they are and how they came to these conclusions.”

The advocate of African organizations, Alodia Borja, said: “We defend the African people, not Assemblyman Delgado.” She also complained that “the cartoon caused a series of tweets against our people.”

The hearing lasted about 120 minutes and the SuperCom representatives said they will decide on the case after analyzing the arguments of both sides, thus they have three days to decide.