GADs´ control generates opinions for and against 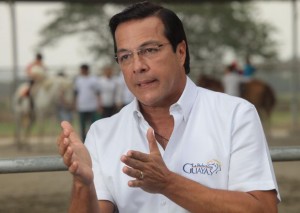 Some pro-government and opposition sectional authorities have their views on the possibility that the Board of Control of the Assembly exercises political control over the decentralized autonomous governments (GAD for its Spanish acronym).

Guayas prefect Jimmy Jairala (Democratic Centre-AP party), said that in order for the Assembly to do what has been proposed it would have to “amend the Constitution.” And besides the Comptroller, prefectures are subjected to other supervisory bodies which are the Provincial Council and the public assemblies.

Paul Carrasco, prefect of Azuay (Participa-Igualdad), considers that the intention of the Commission responds to a “political persecution.” As he insists that this intends to affect those who think differently in the country.

On the other hand, Zaida Loayza (AP), councilor of Guayaquil, said that as authorities their duty is to keep their constituents abreast of their work and believes “there is no problem to include another control body.”

But Sergio Garnica (SUMA-LIVE), councilor of Quito, said that “we should see the scope of what the Commission claims,” and insisted to respect the Constitution so that it does not “generate interference or assumption of duties.”

Dialogue between employers and the government