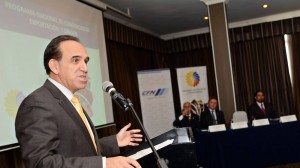 The Minister of Industries, Ramiro Gonzalez, announced yesterday that the government seeks to increase the diversity of supply of induction cookers, as well as to increase the investment in the country in that sector.

These statements were made when participating in an exhibition of manufacturers of kitchens in Italy that aspire to join the state plan of Efficient Cooking.

The Minister also noted that the government will import from China 500,000 induction cookers finished. “Hence the rest will be completely national,” he clarified. Those kitchens will be granted for free to the beneficiaries of the BDH (Human Development bonus for its Spanish acronym).

“There will be enough supply, I aspire we do not have to import more finished kitchens, but rather import in CKD (by parts) so they can be produced in the country,” he said.