Government Calls for Peace Between Both Koreas 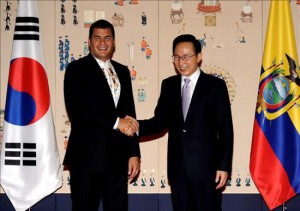 The Ecuadorian government made a calling for peace between both Koreas, and mourned the death of the four South Koreans that fell during the attack of last Tuesday.

Meanwhile the Ecuadorian Chancellery expressed their concern on the terrible events perpetrated against the South Korean island of Yeonpyeong, near the border of both countries, were two soldiers and two civilians perished.

At the same time the Ministry of Foreign Relations called for peace stating that both nations must resolve their differences through diplomatic channels to ensure a peaceful solution. The Government called a denuclearization of the Korean peninsula.