Lentil burgers, soy meat, chia, oregano and basil sausages, or fried are some of the options offered by Ecuadorian brands that sell products for vegetarians, vegans, or simply those who like something different. 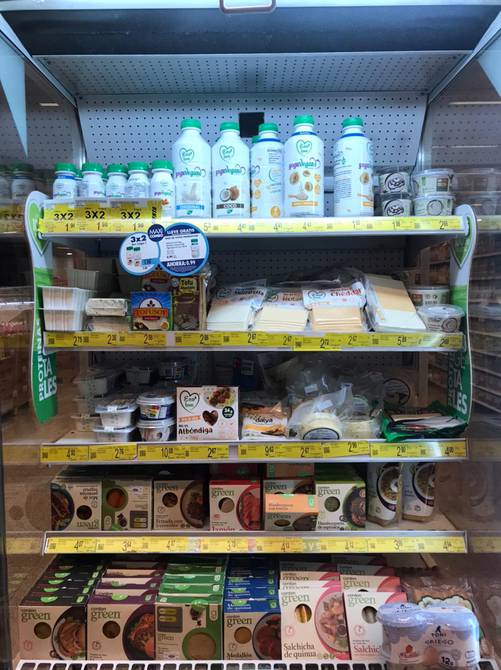 In the supermarket hangers there is a space called “rich and healthy” and there are the brands Cordon Green and Eco Love.

The increase in demand in the sector ranges between 10% and 40% during the pandemic. And many of these products are displayed in the main supermarket chains in the country.

As with Cordon Green , a family business located in Quito that manufactures products based on vegetable protein. The assistant manager Paola Molina says that the business started 13 years ago as a result of a pre-infarction in her father, which caused them to change their lifestyle.

And given the few options in the market, they decided to create gluten-free quinoa medallions, bean burgers and other products that are now offered in 52 supermarkets.

“It was due to a health issue that she became vegetarian and then my mother,” says Molina, who also changed her way of eating.

Cordon Green started with nine varieties of products and now owns 18. They recorded a 10% sales increase in 2020 compared to 2019.

Francisco Hoyos, president of Vgano , a company also under the same line of products , agrees with this . He believes that the rise is also due to the awareness of respect for the ecosystem.

“The main concept is a cause of how to avoid animal abuse, it is what moves us, to replace the animal protein in the dishes with high quality vegetable protein. While we respect the lives of other beings, we take care of our own ”, he says.

Vgano has been in the market for 15 years and has grown between 35% and 40%. They make pizzas, cheeses, desserts, sausages and more. All of vegetable origin and gluten free.

They are found in specialty stores and have shipped nationwide.

With the pandemic, home delivery from orders placed on social networks also increased, which is why Hoyos considers that this tool was key to the growth of the company. “Customers could not go and they placed orders with us and we set up a delivery, ” he says.

Nueva Vida is another company and is located in the south of Guayaquil. They have been for 25 years and have 18 varieties of products such as sausages and soy-based meats. They distribute to supermarkets, restaurants or health food stores.

Vanessa Bermúdez owns the company and affirms that her clients are varied, although there is a greater presence of young people.

“It is not only the fact of becoming a vegetarian but also eating different things. For example, products for people with a gluten allergy, chickpea sausages and sausages with beans or mushrooms, tofu ”, he explains.

Although some of its distributors closed, the company managed to maintain itself through delivery .

Nueva Vida ships nationwide and its products have reached Galapagos.

And although not everything turned out well for certain companies, they have tried to maintain themselves and not decline as with Eco Love , an Ecopacific brand. They have been in business since 2018 and have a portfolio of 42 products such as cheeses, yogurt, pizzas, meatballs, the same ones that are displayed on an exclusive hanger for this healthy line.

Jorge Vasco, commercial manager of Ecopacific, mentions that sales fell by 20% in the pandemic, but they are recovering satisfactorily.

“Our line was not an exception to the pandemic, we fell in sales by 20%, but it has been recovering little by little and we have tried to develop new products,” he says, adding that they are innovating to overcome the mishap.

For this reason, in mid-June they will launch vegan ice creams with chocolate, red fruits and almonds.

“(Innovation) is something that characterizes us. (The pandemic) has helped us develop more products, ”he says.

Cordon Green also analyzes creating other products such as snacks by 2022; Vgano is working to expand under franchises; and Nueva Vida wants to create a virtual space for the preparation of recipes with its products.

Everyone believes that vegetarian and vegan products are going to be kept out of respect for animals or for health.

Products are displayed at fairs, stores or mini-supermarkets

Products that are healthy or intended for those who practice vegetarianism and veganism are also displayed at fairs, specialized stores or mini-supermarkets.

As in the Molienda Organic Market , in Urdesa. This business has been exhibiting natural and artisan products for four years and 90% is of national production.

Paula Molina is the owner and on the site she shows more than 100 products from different brands, some are her own and others from entrepreneurs.

“We have our own farm and it is aimed at people who want to eat healthy. We have products such as vegetables, fruits, butter, vegan and vegetarian meats, frozen meat such as pizza, ice cream, natural cosmetics ”, he explains.

2020 was a good year and it debuted with home delivery. Molina hopes to expand its store to have a greater variety of products.

Meanwhile, Alpeso is a two-year-old eco-healthy store or mini-supermarket , which also exposes vegan or vegetarian brands. The peculiarity is that they sell the product in bulk, says co-founder Mónica Torres.

Such as honey, grains, pasta, nuts, seeds, cereals, flours, among others.

Torres explains that the pandemic made customers buy less, but also expanded their acceptance, which in his opinion compensated.

“We were one of the few businesses that opened in a pandemic and it was an opportunity to make ourselves known. Many people did not want to go to the supermarket. (…) You can see that customers buy less, but the fact of making ourselves known has helped us to have more customers and with that offset the reduction in our customers who keep returning, but are looking at their pockets more ”, he explains.

But the products are not only displayed in stores or mini-supermarkets, but at fairs such as those held by Vegan Day. Its creator, Karina Reyes, says that they have had this initiative for four years and hope to carry out another one in August.

The events bring together about 35 brands of natural, organic products that do not come from animal origin.