“La Toquilla” rocks out the the popular song “Palomita errante” 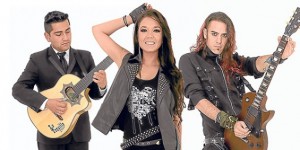 Portoviejo performer “la Toquilla” sings the popular song “Palomita errante” (Little Wandering Dove) with touches of electric guitar from the hand of Agnis Durden, and samples with synthesizers by Pablo Estrella, former Cruks in Kamak, that merges with the fife of Vinicio Muñoz.

Her real name is Alejandra Garcia, who has lived in Quito for 15 years without forgetting her Manabi origin, something that is reflected in her stage name, taken from the plant with that is used to make hats in her hometown.

La Toquilla moves her hips when walking with Agnis and Vinicio through fictitious roads simulating trips to the Ecuadorian highlands during the 3 minutes and 5 seconds of the video.

Behind the 3 artists valleys, the Chimborazo, the monument to the Equator and landscapes can be appreciated, but these are digitized. Paulina Tamayo is sitting on a chair as if it was a throne, with a stately air and the pictures of Julio Jaramillo as a background.

In fact, the Quito interpreter, 50, is one of the references of Manabi in terms of national music.

4 coaches of the Voice Ecuador are confirmed

Ecuadorian photographer on the cover of National Geographic