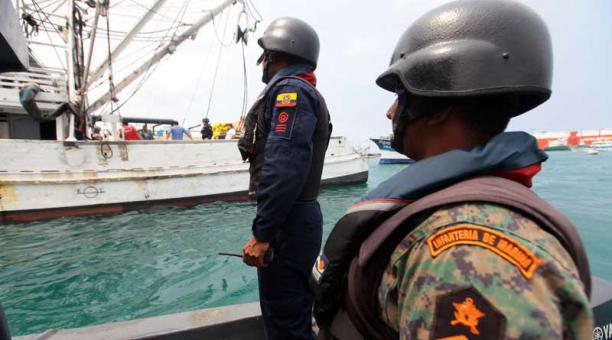 The participation of artisanal fishermen in the shipment of drugs to the United States and Central America led to another crime: fuel trafficking. In the last year, the mafias have recruited boatmen to also supply gasoline to ships waiting at sea and ready to carry the alkaloid.

Anti-narcotics agents and the Navy warn that this phenomenon is new and that it takes strength on the coasts. How do you catch the boatmen? Unknown people come to the villages and offer up to USD 1,000 for a single trip, to smuggle up to 50 petrol cans offshore. These cases have been reported in Guayas, Manabí, Esmeraldas, Santa Elena, El Oro, Galápagos and Los Ríos. For example, in Jaramijó, a fishing village in Manabí, this illegal offer began eight months ago. Their fishermen say that the drug traffickers ask for between 20 and 50 fuel cans each week. The Coast Guard of Manta has similar information.

They assure that the mafias pay up to 20 times more than what the fuel usually costs. Artisanal gasoline costs USD 0.90 per gallon. These data are already known to the embassy of the United States in Guayaquil.

In November, Consul Andrew K. Sherr traveled to Manabí and met with relatives of fishermen who are detained in other countries. There he gathered data of this new illicit. Residents of San Mateo, another fishing town of Manabí, told him that the poor economic situation of the fishing makes the boatmen accept the illegal proposals. For two days at sea, our relatives earn between USD 50 and 80. That does go well, but if the fishing was bad, they return under loss.

On the other hand, drug traffickers pay them well and it is sure money, “the fisherman’s wife told the Consul. Anti-drug agents have already tracked the crime and tell that the boatmen are supplied with fuel both in local gas stations and in the pumps that sell the fuel for artisanal fishing. The researchers warn that in this last service every fisherman has limited places for a month. What they do is take all the assigned fuel and the rest they get at other gas stations. The police know that the criminal organizations help with the collection of the material and the boatmen are in charge only of the transfer to the points of supply. The coastguards indicate that although the maritime perimeter is difficult to track because of its great extension, in the last year they have had good results. In one of the last operations, the uniformed officers seized 50 cans of illegal fuel inside a boat.

This happened on the coasts of Esmeraldas, in the middle of this month. The uniformed ones needed a helicopter to persecute to the boat that was full of gasoline. Then they discovered that he also carried 1.3 tons of drugs. The boat was equipped with three engines and it is suspected that it was traveling to Central America.

The sailors identified that, precisely, the equipment of specialized engines in the boats that carry drugs makes the narcos need the fuel. In addition, this crime has become safer for fishermen, who are less risky compared to bringing drugs to the United States. The threats and extortion of criminal gangs who managed to return from travel is another factor that drives this new crime.

In Esmeraldas, fishermen admit having proposals from drug traffickers to move fuel illegally. Two boatmen from that city told that their companions leave as if they were fishing. They even carry the fuel tanks under the fishing nets. Among them, those who do illegal activity are easily identified. Two aspects gives them away: First: only three or four go and not 10, as is customary for daily tasks amd Second: they easily deviate from fishing areas, return without merchandise and in shorter times.

The first cases of fishermen recruited by drug traffickers appeared in 2015 and there was a rebound in 2016. By then, there were 300 boatmen from Manabí, Esmeraldas, Guayas, Santa Elena and Los Ríos, detained abroad. (I)