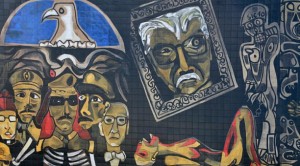 The Prosecutor’s office said they will not remove the mural “Cry of memory,” which is exhibited in its facade, after the request of the daughters of the former President Leon Febres-Cordero.

On one side of the mural are shown Latin American dictators like Rafael Videla of Argentina and Augusto Pinochet of Chile. A little apart and in a frame, there is a portrait of Febres–Cordero.

In a statement, the institution said that the painting by artist Pavel Egüez collects the constitutional provision ordered by the State to guarantee the effective enjoyment of HHRR.

According to the General, Prosecutor, Galo Chiriboga, who subscribes the newsletter, the Ecuadorian State became a ‘violator’ of rights because for decades it ignored its obligation to repair in an integral way the victims of crimes.