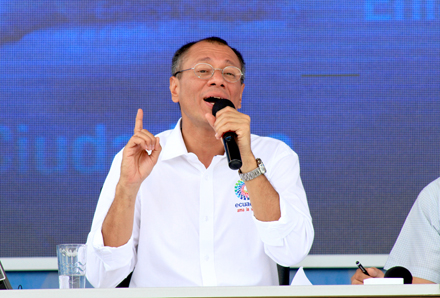 The vice president, in charge of the Presidency while the current, Rafael Correa, attends to see his daughter’s participation in the Bolivarian Games of Peru, noted in Saturday’s broadcast , that the U.S. ambassador violates the Vienna Convention with his statements.

He Said that Adam Namm’s concerns about certain policies of Ecuador were misplaced and claimed that their expressions contravened the Vienna Convention which governs the conduct ofdiplomats accredited in other country.

“We are not interested in the opinions of the ambassador (United States) Adam Namm. If he wants to say something, he should comment  about his country, we don’t mind,” said Jorge Glas.

Namm, on Tuesday questioned some policies of the government of Rafael Correa, for example in maintaining bilateral relations with countries like Iran and Belarus. He stressed that his position was that of the nation which he represented.

Glas said yesterday that the media acted as “acolytes “of Namm to post his comments. And he repeated: “Mr. Ambassador, respect the Vienna Convention.”

The vice president addressed other issues, including the audit which  the Comptroller carried out  to Sepri SA, security company of the armed forces, which provided services to employees of the multinational oil company Chevron.