The global health crisis due to the effects of the coronavirus and which has already left more than 1,600 dead has caused Ecuadorian executives and tourists to cancel, suspend or rethink trips to China . 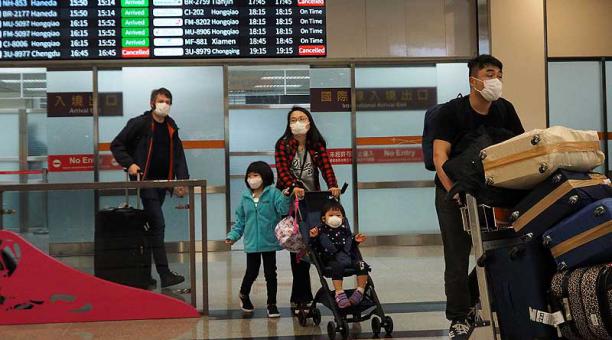 Local businesses warn of complications in receiving and sending merchandise , as well as a drop in requests for tour packages .

According to data from the Ministry of Tourism , in January of this year there were 976 departures to China. In the same month of 2019 there were 1,144.

China was the destination where the number of visitors was most reduced, since in general the departures increased by 11% in that period. Trips to major destinations such as the US, Peru and Spain rose. The decrease in travel to China coincides with the month in which the global risk for the epidemic worsened.

Stephanie Toapanta, commercial manager of the Kangu Importer, in Guayaquil, planned to move to the Asian country in February, but before the health alert postponed her trip to April. If the situation is not resolved, do not rule out canceling your trip.

The company that manages sells items for babies. The agenda in Beijing was key to business planning, because new suppliers are hired there. “Now we cannot renew our collections.”

The outlook for Kangu is especially complicated because one of its suppliers is in the city of Wuhan , in the province of Hubei, where covid-19 began to spread and is under strict quarantine.

Brothers Pedro and Juan Carlos Figueroa, representatives of Figueroa Warehouses, also paused their trip, as a precaution . They planned to attend a fair in Canton in April, one of the largest commercial exchange spaces and which is currently suspended indefinitely.

Almacenes Figueroa, also from Guayaquil , sells personal and household items. About 70% of the products offered are of Chinese origin. The brothers are concerned that the cargo they requested last January has trouble arriving in August.

The low attendance at the fairs is a “blow” for the trade, notes the Chinese Ecuadorian Chamber of Commerce (CCECH). There are no interested parties for the four events that take place between April and May, said Gustavo Cáceres, president of the guild. Last year 30 people signed up.

During those months, trade missions to the Canton Fair are carried out , the visit to the Yiwu market , which is a larger wholesale center, a student mission and a sports mission to the Chinese Wall, among others.

David Grijalva, CEO of China Conexion, travels three times a year (March, October and December) to the Asian giant, on business . But this time he decided to reschedule the first flight for May.

China Conexion, a multinational based in Canton, works as a liaison between companies around the world, including Ecuador, that buy and sell to China.

Grijalva says that he has received numerous calls from Ecuadorian executives who gave up attending the fairs for fear of contagion , but who are looking for alternatives not to neglect their business and try to mobilize the cargoes stopped.

Cancellation or postponement of visits affects travel agencies. Although there are no direct flights connecting Ecuador with China, operators offer trips with stops in the US. or Europe

International airlines suspended their routes to the Asian country, totally or partially, as a precaution. Among them Air France, American Airlines, KLM, Iberia, British Airways and Air Canada.

The International Civil Aviation Organization said last February 13 that the epidemic has caused losses of up to USD 5 billion in revenue for airlines since the beginning of this year.

“That is explained because there is uncertainty in the traveler about whether or not it is safe to travel to China,” said Diego Padula, head of the official Association of Travel and Tourism Agencies of Ecuador (Asecut).

At the Firentur agency in Quito , this year they have not received requests from people interested in moving to that country. In Ian Travel, Guayaquil, packages have also been canceled for Spain and the United States, countries where there are confirmed cases of patients with coronavirus.

While there is uncertainty, Jenny Almeida, executive of APN International, recalls that in some Chinese cities activities began to revive .

APN is a link for Ecuadorian firms that export to China and also manages visits by university students to companies. Because of the risk of the disease, a group of 20 students were unable to meet Beijing in February.